Horses symbolize intelligence, wisdom, wit, consciousness, light, dynamic force, swiftness, quickness of thought, the running of time. During all times it was considered that horse is a powerful and full of will animal. A man has always had the attitude full of respect to horse because this animal helped him with any kinds of activities. That is why for some people horse tattoos can be very popular. In China it is considered, that if a person is born in the year of the horse, he will be a hard worker. Such people also like to be in the center of attention, if they are alone, they are usually in sorrow.

Horse tattoos can bear different meanings depending on the appearance of the tattoo and on its color: if it has light color, the tattoo is associated with the forces of light, if the color is dark, the tattoo brings everything negative, death and the connection with demonic forces. If the horse tattoo design is of red color, such tattoo becomes the symbol of fire.

Horse tattoo designs representing running horse symbolizes speed, freedom, the forces of nature, wind. The image of Pegasus hints on the longing of its applicant towards anything unknown.

Many people consider horse tattoo designs to be a kind of certain protector, that also helps to develop intuition and to reveal the best traits of character at its best. That is why such horse tattoo will be a good thing to do for those people who want to become powerful and romantic, hard working, longing for aims and full of energy, or for those who already possess all these traits.

Its symbolic meaning horse got in the times of carvings on rocks. From the time when the man was able to tame this noble animal, horse became not only needed domestic animal, but also the took the meaning of richness, power and endurance. For the man, to whom the horse belonged, new possibilities were open. From ancient times people considered that horse skull was able to bring fear to the evil spirits. As the time was passing different people connected this symbol with their gods. 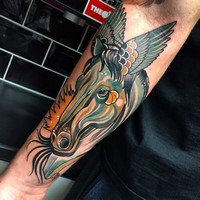 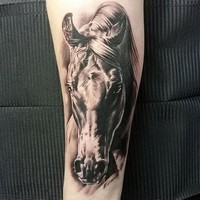 Horse tattoo designs are connected with water and fire, that is why they can be the representatives of lunar and solar animals. According to the beliefs of ancient people, this animal drives and follows gods and brings dead people into another world. Among ancient Celts horse was the symbol of cycles in nature, life changes, beauty and swiftness.

Chinese people considered this animal to be very clever, they thought its appearance to be a good sign, associated it with hard-working and speed, the flow of time, swiftness and quickness of thought.

It is interesting to notice that very often horse is compared with unicorn – the symbol of purity, beauty, grace and elegance.

According to the opinion of everyone, horse is a strong-willed animal that must be treated with respect – horses have always helped humans in their everyday life.

The horse tattoo cannot be seen on the skins of young females or brutal men. Such horse tattoo designs are chosen by real lovers of these full of pride and gracious animals.

Among the people who love nature or such animals, horse tattoos are very popular. The horse tattoo designs can be very different – black and white or in full color, but there is one thing that you can be confident of – it doesn’t matter what horse tattoo design you choose – it will always look great, but only if you do the tattoo with the help of experienced tattoo artist.