Here in this article we will try to give you the idea how to understand the whale tattoos. We’ll also speak about the history of this image and different meanings. For those people who want to apply whale tattoo onto their skins, this information may be very helpful.

In our modern times you may not see the whale tattoo too often. Usually they are applied by people who have some attitude to whale protection and so on. However, from the ancient times the whale is very contradictive symbol in many different parts of the world. However, it is also considered to be very meaningful and powerful. When the understanding of its meaning comes, everyone can find part of himself in whale picture. So let us understand how different the meanings are now and among our ancestors. For contemporary man it is very clear that the whale is a good animal that intends to harm noone, beautiful and calm as well as sure in itself. Its life in the seas and oceans is charming and its jumps are fascinating.

If we translate whale word from the Ancient Greek language, we will see that it can be translated as the sea creture. It is widely known that due to their immense size whales brought fear to the hears of our ancestors, as well as due respect. Some people considered whales to be the messengers of the gods, bringing justice. Others, mostly Christians, thought of whales as of the creatures of hell and death as well as the future rebirth. Sea travellers saw danger of whales and considered whales to represent the undpredicable seas that can sink their ships. It is also necessary to remember the three whales that hold all the world on their backs, being the background of everything and the foundation of the world, something significant and global.

The whale tattoos, as well as the whale itself, has many different meanings in different epochs and among different people. However, all of them are deep and great. We can speak here about the eternity, might, power and greatness as well as calamity, eternity. Also whale tattoos depict the spirit of the sea, striving to have high aims and solving them, harmony. Also whale tattoos mean resurrection - we can see it even in Bible where Iona, who at first was eaten by the whale, came back after three days and three nights, resurrected.

The whale tattoos have a lot of meanings. Whale is usually considered to be the ruler of the seas and the symbol of the oceanic deepness. 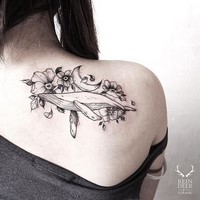 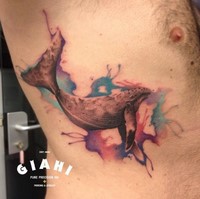 Whales are mighty and that’s why everything connected with it is considered to be great. Whale tattoos contain all the qualities of the whales - the deepness, the power, the significance. Also whale tattoos may be considered to mean freedom and lack of pace, eternity and nobility. Whales, according to the ancient people beliefs, were ruling the oceans, and that’s why whale tattoos usually mean significance and might. Ancient Greeks had a legend, according to which the name whale was taken from the name of the goddess Keto, who was the master of the seas and everything living in it. This is why whales are considered to be the divine creatures, sent by the gods to help people and to bring justice for them.

Of course, as we have said earlier, whale tattoos cannot be too often met nowadays, mainly ending on the skins of the people who really are connected with the seas or with the whales themselves. Nevertheless, the power of such tattoo is really great and if you choose to apply whale tattoo design, it will be appreciated by others for sure.

Whale tattoo designs are mostly applied by men but have also been seen on female skins as well. However, as it has been stated, they can still be seldom seen, despite their attractiveness.