Today swan tattoos are known to be rather popular and there is the reason of it. First of all it is because such kind of tattoo demonstrates the purity of the romantic relationships, the honor and the ability for transformation, however, for some people it is widely known that swan tattoos may be really different among different peoples.

However, swan tattoo designs first of all mean purity and devoted love. Also swan tattoos gain additional meaning in the cultures of different people. In the understanding of the ancient Celts this great bird had a great ability to heal and possessed such quality as generousity. In Christian religion there have been traits of character of the person that sufferes a lot, for example the kindness of heart and willing to obey. Among ancient greeks the swan was most of all associated with the change of traits and looks and here the myth of Zeus comes along - this god, while chasing the attention of the charming Leda, came to her in the image of the swan. Besides that such gracious birds have been those who supported Appolo and Aphrodite always, becoming their attributes.

In the cultures that glorify the power of different elements, the swan became the combination of the water and the air elements, having taken the air, purity and ability to gain multiply forms. Thus american people considered that the Great Spirit will allow the swan to bring the four winds. According to one of the finnish legends the swan has been the symbol of the river that was going along in the world of the dead. 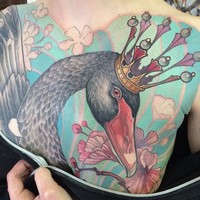 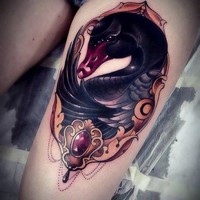 Most of all swans are associated with the light, however there are also some dark meanings of this swan tattoo designs. Some legends tell us that the pure white feathers may conceal bad spirit under there purity.

If it is so or not, we are not sure, but nevertheless the tattoo in the form of the peculiar white bird gained certain popularity among those who plan to marry or is married already. There is of course a beautiful legend connected to it telling us theat the swan leads all his life with only the one bird of its kind afnd if it dies, they die themselves, singing at first the farewell song that is as beautiful as sad at the same time. That is why swan tattoos are known to be often applied to commemorate the loss of the close relative or beloved one.

Such swan tattoo design is known to be extraordinary and that is why it is very popular both among males and females. For example among the females that are in prisons the swan tattoo design with the crown on the head of the swan as well as date under it can be deciphered as - I was free until has been condemned.

According to the color, there may be white and black swans. The first ones speak about virginity and purity of life, and the second ones show the ability of magic deeds and ability to know the future.

As we have already stated, the swan tattoo designs mainly mean purity and heightened spirits. Black bird also can mean the person of the man with magical abilities and the man of mystic force. This bird is very good looking for creation of the paired tattoos, because each and every part is finished itself and can be easily recreated. Thus when you join hands it can look really great and interesting, revealing a very beautiful swan tattoo design. That is why nowadays many people who love tattoos present tattooing as their wedding present to the one they love.

In the tattoo the swan may be depicted either schematically or by using many different colors and peculiarities for this kind of bird.

Swan tattoos are usually very beautiful and one may choose them especially because of this peculiarity. Choose the design that you like and apply it.