Squirrel is usually associated with a high productivity, loving of the hard work and doing it all the time, ability to store different things, ability to create comfort at home. Squirrel is basically the symbol of home itself, as well as the symbol of fertility, wit, speed and agility. This “home” animal perhaps first of all symbolizes the home that is known as “full” because of the tryings if its inhabitants. On the other hand the squirrel symbolizes wit, ability to foresee many things, as well as greed and selfishness, ability to plan everything in advance and to live in different circumstances. Even more, this animal is looking very cute, it is furry, and therefore it may be chosen for the tattoo design just because its physical attractiveness. The red squirrel is highly connected with the fire element. For example, the ancient slavic people considered the squirrel to be the symbol of thunder, heavy rain and different natrual disasters. In future it became the foreteller of wars and different other disasters. In Japan, on the contrary, the meaning of the squirrel symbol was quite positive always - there this animal meant fertility, richness, artistic beginning and creativity. It was considered that squirrels have a lot of different original, fresh and interesting ideas for different occasions in life.

The playfullnes of squirrels has often been associated with childhood and many different positive things, however, it was also associated with something demonic, with striving to fool someone. To fully understand the meaning of the squirrel tattoo design it is necessary to pay attention not only to the stylistic of the fulfillment, but also to the whole composition in which the squirrel participates.

Who should have squirrel tattoo

The squirrel tattoo design will be suitable for the person who leads the active live, who loves to move a lot, is highly optimistic, is really flexible, loves to work, but is however somewhat conservative, good looking, who values the family and all the good thing connected with it, as well as all the relatives. It is necessary to underline that squirrels are not known to pay attention to small things that mean nothing and greed. Also it is known not to believe all the world and people blindly. It thinks several times what to do before it takes some decision. Also it is seldom when the squirrel accepts any help in moving to its aims. The squirrel tattoo will look the best on the people that are lean and neat, as well as short,and not on the people who are big with highly developed muscles. Mostly often squirrel tattoo designs can be met among women, but still they may be also sometimes seen on the skin of the man.

The squirrel tattoo design usually looks rather playfully and original. However, not all the people know about symbolism of this animal and may use it simply because it is looking good.

As it was stated , in ancient times squirrel was highly connected with the fire, sun and light symbols. It is so because the color of the squirrel is usdually red. Also it usually symbolized lightning and thunder. 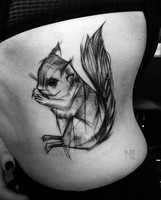 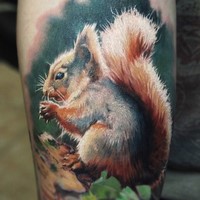 Squirrels in the ancient times also had some mystical meaning and it was considered that the squirrels have mystical abilities. It was believed that the name of the squirrel was coming from the word “white”, and white is the sign of purity, it can be seldom seen in the animal world and therefore  is referred to as the mystic color.

There has also been a belief that some mythic characters, such as mermaids or other creatures may come in the form of squirrels, because they move at the same pace. Usually squirrel tattoos are very good looking and attractive.