Raven in the tattoo world is present since ancient times, from the time of the Celts, but does not lose its essence and meaning of popularity today. The meanings of the raven tattoos are very diverse, and has some positive and negative aspects.

Raven is an ominous bird that is considered to be a symbol of the wind, and according to the legend, he can live up to three hundred years, thanks to the fact that it feeds exclusively on carrion.

In the culture of ancient Greece, the raven symbolizes longevity and fertility, and is considered to be the best travel companion and was also widely used for predictions. He was the messenger of the Greek gods Apollo and Athena. In Scandinavian mythology, tribal war god Odin was accompanied by two ravens - Hugin and Munin, symbolizing concepts such as intelligence and memory respectively. In ancient Rome, the meaning of the raven was known to be the hope for all because it is a far reminiscent of the Latin word "coloring", which translates as "tomorrow."

In the Christian religion the raven is known as a very evil bird, it is associated with the devil, and assumes the role of the bird that brings only evil being and avenger, as opposed to a white dove, but at the same time it helps the righteous and hermits. In the Holy writing, when the prophet Elijah has been a long time in the desert, the ravens brought him food and thereby helped to survive. In the culture of Egypt Raven embodies hatred and destruction, and the ancient Chinese point to the strength and steadfastness. In China there is a legend about the sacred crow that lived in the sun. This raven became a symbol of the rising, zenith and sunset, as well as the emblem of the dynasty Shui. In Japan, the image of the raven is symbolizing the love for the family. For Africans raven has become a symbol of universality and faithful guide, it was believed that killing a crow leads to deterioration of the weather 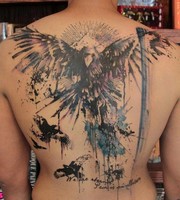 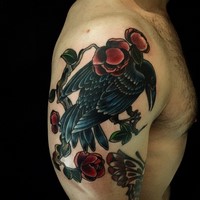 Thanks to his long life raven has become a symbol of wisdom and loneliness. But mostly in many places black ravens are considered to be not good omen. However, it is widely believed that  if the black raven possesses a white feather - it is a good sign. In Canada for example ancient ravens are considered to be great shamans and they are really worshiped to as the ancestors of men. You can see that it crows and wolves are the most common satellites and messengers of the gods from the realm of the dead. Therefore, the value of a raven tattoo may be associated with the pain of loss or losses.

The raven tattoos and the art of the ancient Celts associated with the image of a raven goddess Morrighan as well as with the gods of war and death, the sacred symbol of the crow was used in divination and magic rituals, so it also became a symbol of the prophecy. In Russian fairy tales crows are known to often be accompanied by witches, wizards and sorcerers. As it is widespread, ravens should be treated with caution and disdain, because they are big, bad, and they can not be used for food.

Meanings of the  raven tattoos are known to be quite interesting, but in the particular case it is determined by the carrier of the tattoo, i.e. the person, who decides to choose the raven tattoo design as his primary image in tattoo, and his personal attitude to this ominous bird.

Tattoo with the image of a raven is among the popular ones and can be met almost everywhere. It is connected with ancient beliefs, most of which the bird is associated with dark and not very forces. Sketch of tattoo crow is most often performed exclusively in black and white, rarely added to any color. Apply such a tattoo on her shoulder, chest, back and other parts of the body.