The image of a pig for tattoos doesn't belong to the category of the popular, so one cannot say that they are really wide spread. A pig is known as an ambiguous animal. Different religions differently treated this animal. In the Buddhism for example  the pig is considered to be  a sacred animal, while in Moslem world it is considered to be dirty and vicious. The boar usually symbolizes opposite things: avidity and prosperity, embitternment and passion.

Tattoos comprising the pig can usually be divided into two types:

The first type – lovely cheerful creature, mainly of a pink color which causes affection and testifies to pensiveness of nature of her owner, the gay character, lack of fear and usually  seems ridiculous in the opinion of people around, but possessing sense of humour itself. The small pink tattoo with the pig tattoo design will amuse people all around. The free relation to life, optimism and life on a positive – those are the distinctive characteristics of the owner of such tattoo design.

The second type – too spiteful and frightening image of a boar, is frequent with blood traces, testifies to determination of her owner, aggression, a certain embitternment on world around.

The meaning of such tattoo design depends and on the fact, the image of a domestic pig or wild boar is used. The domestic pig is considered a symbol of wealth, fertility, prosperity, but this animal can usually also be considered to comprise with such negative characteristics as rage, avidity, lust. The wild boar symbolizes aggression, endurance, family fidelity.

In China people usually don't divide animals on wild and domestic. Therefore the same tattoo can be treated differently in terms of its meaning. The domestic pig is associated with sacrifice and mildness while the boar symbolizes courage. By the application of a tattoo with a boar, the person shows his courage, power, wisdom, cunning and dexterity which are peculiar to an animal. 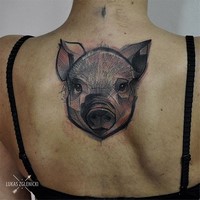 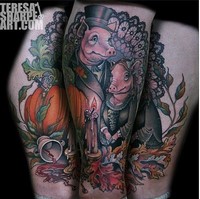 Tattoo in other cultures

Some cultures traditionally prepared tattoo paint by adding fat of a domestic pig or wild boar and even especially breeded and kept them for such purposes.

The tattoos representing a wild boar belong to the most ancient beautifying of a body and symbolically mean a lot of things. For ancient Scandinavians the brave and uncontrollable forest boar became a symbol of valor of soldiers, also as well as a bear or a wolf. The most courageous and skilled warriors pinned to themselves tattoos with a boar as the sign meaning their undoubted victory over the enemy. Besides, similar images on a body spoke about the man's force and fertility of their owners.

Japanese consider a white boar the unusual and magic animal capable to allocate people with supernatural opportunities. In Japan the wild boar symbolizes courage, never looking back and eagerness to fight, and the owner of a tattoo with a white boar declares his fearlessness, firmness and persistence on achievement of any purposes, and also inability to recede back.

In Europe the tattoo of a boar was, as a rule, represented on a shoulder or inside of a forearm. Hunters usually shown that they won’t come back without any luck from their hunt by applying such tattoo design on their skins. The boar on a shoulder symbolized fearlessness, courage and courage.

Boar and pig tattoo designs are not very wide spread but still possess enough great qualities to show  and that is why they are really attractive and chosen by people across the world.

Tattoo artists will have to offer plenty on this matter and you will be able to choose the exact tattoo design that you want, that will be unique and greatly looking.