Penguin is used in tattoos for both males and females. Those antarctic birds are carried out in different ways, depending on what meaning  their owner wants to see in the tattoo image that he applies. Mainly the penguin tattoos mean good thing such as love, sincerety, willing to trust others. It is often used in the cartoon style, that gives the image of a kind of reverie.

The word "penguin" is often used in prison slang and in prison life, especially in Russia. Abbreviation stands for "forgive and do not be sad, there is absolutiely no need to look for someone to blame."

If course even if you don’t like any of the meanings we have been talking about, you can imagine your own meaning of a tattoo and still apply it if you like its appearance. Penguin is also known to be the proud and capricious bird. It will add zest to the female wrist. Penguin tattoos may be really different depending on the intricacy and complexity of the application, but this lovely picture of penguin on your body  will surely  be stylish and actual decoration. Tattoo is a pretty addition to the image of the evening. Also such funny picture will constantly make the mood of the owner and others who see it much higher. You may imagine any penguin tattoo that you like and ask your tattoo artist to apply it.

If we speak about the penguin as a cartoon character, it may be considered to be masculine and feminine at the same time, it all depends on the size, shape and appearance of the bird. Men often prefer to use more realistic figures, while women choose cartoonish characters.

As mentioned above, the meaning of a penguin tattoo depends of what you want it to represent. It does not have to possess a very deep meaning or understanding. Tattoos on which the penguin is depicted are primarily applied to the wrist, upper arm, shoulder blade, if we speak about the body parts that are most suitable for such penguin tattoo application. In most cases, you can watch out for quite different color options, not limited by the typical ones, however, we should speak of them at first. Typical colors that are used while depicting the penguin are a black back, white belly and legs, as well as yellow beak. However, there may be quite different approaches to penguin. You can meet and pattern of a contour of a bird. Some prefer penguin tattoos and images to be depicted in the style to represent the old school. 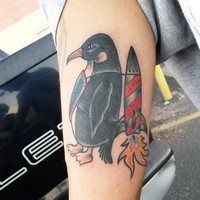 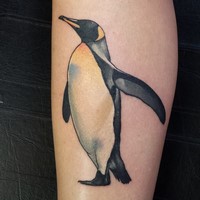 Usually penguins show up as some mystical creatures with a very frightening appearance (fangs, claws, webbed wings, stringy body), and they may be extremely dangerous to humans - in the view of the ancient Greeks was such a chimera.

Mainly those creatures have come to the tattoo world from the ancient Greek mythology.  Man choosing a tattoo with the image of the chimera, thinks outside the box and are not afraid to challenge the community to be in the spotlight.

Of course, there are many different meanings and understandings of the penguin tattoos and everybody is free to choose the one up to his or her likings. Nowadays many experienced tattoo shops may offer many different penguin tattoo designs and of course the main idea of any tattoo design is that it should be first of all unique. Current experienced tattoo shops have as a rule quite vast portfolios and therefore will be able to offer you many different variants from which to choose. Currently we cannot say that penguin tattoos are too popular, however it is rather strange because penguins look equally attractive both in the real world and in the world of tattoos. It is likely that the penguin tattoos will become more and more popular over the years because of the attractiveness of this animal.