The parrots have always attracted the attention of people because of their vivid colors, their attractive looks, but also they are highly notable because they may repeat different sounds, as well as the sounds of human speech. Parrots are associated with loving of themselves, with striving to look always great, with not taking life serious as well as the problems that are arising in it. They are also known to copy everything without thinking, for talking without the reason, for doing always what they want to do and not what they don’t want to do. They always have joyful characters and have good memory for many things.

Let us see the symbolics of the parrots - it will be quite useful to understand the meaning of the parrot tattoo designs. For example in Christianity parrots have the positive symbolics, they are depicted on the paradise gates and are known to always be connected with the Holy Mary. In ancient Chinese and Japanese beliefs the parrots became the attributes of king-hearted goddess Guanin. In the Ancient India those vivid birds were considered to be an erotic symbol and were highly associated with the poetry and love. Even more, it was considered that the parrots may tell everybody the future and arouse rain in the time of heat. For example, the Mayan people treated the parrots somewhat distantly. It was considered that the Ara parrot can bring the person silly wit and many bad things.

The tattoo with the depiction of the parrot usually symbolizes the striving for everything joyful, great and joyful mood, leading a great life as they want. Also such tattoo may hint on the loving of a person to consider himself to be the most beautiful in the world. However the parrot tattoo design may also mean the striving to make the world around greater and more interesting and to make the reality more beautiful. The parrot tattoo design will look the best and suit the people who are known to be joyful, artistic persons, that are also known to be optimistic, who are striving to communication, pleasing and joyful. Such people usually want to make the surrounding world more vivid and colorful.

So as you can see in our days the parrot depictions can be met not only from the child books and touristic badges but from the skin of other people. Ask your acquaintances what they think about the parrot as the tattoo symbol. For sure they will answer you that first of all parrot symbol means joy for them. Really, parrots can mimic different sounds and even the voice of the men, they don’t let their masters feel alone. 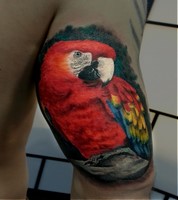 Parrot tattoo in fiction and literature

Other people may tell you that you should seek the understanding of the parrot tattoo designs in literature and in cinema, where this interesting bird is known to be the attribute of pirates, sorcerers and shamans. Some ancient tales also contain descriptions and stories where the parrots have been used to communicate with spiritits. It does not really matter which explanation you choose first of all, but the parrot tattoo design will be looking especially great on the person who is of course very joyful, uses to thinks of no big problems that gains advantage from live and leads it as he wants it. The applicant of such tattoo design is usually optimistic, original and great looking. As for the best place of the parrot tattoo application, we should say that there is no special place for it. Parrot tattoos are looking really good on different parts of the body and this means that they may be applied to almost any part of the body that particular person wants.

Such parrot tattoo designs are usually looking great, vivid and picturesque and that is why many people choose them as their tattoo design.