Moth tattoos are not very wide-spread. In fact, you won’t find to many people who want to have moth tattoos as their primary tattoo design. Therefore it is a rather interesting creature that should be worthwhile to speak about. First of all, it is necessary to understand the meaning of the moth symbol, before we proceed to understanding of what moth tattoos mean.

First of all, it is necessary to underline that moths in symbolism are almost the same as butterflies, however, there are some characteristics that are distinguishing them from butterflies and other similar insects of the kind.

The first contradiction comes from the fact that moth is considered to be a nocturnal creature, while the butterfly is known as a creature that lives and acts mainly during the day.

That is why moth tattoos get the symbolism of all the nocturnal creatures. This symbolism includes such traits as being always psychic aware, possession of the secret knowledge, belonging to another world. Also moths have always been known as the insects that are symbolizing shadows or dreams.

All those meanings come from the fact that nocturnal creatures love night more than day and mainly exist in the darkness.

Moth tattoos can be really different. They usually look great, but in the most cases they are made in black and white to support the fact that they are used to living in the darkness.

All other meanings moth tattoos take from general insect tattoos.

Tattoos with insects differ in their intimate symbolics and in something even sacral. Representing a binding thread with the mythological worlds, tattoos with insects can cause absolutely mixed feelings. A similar sign on a body – the messenger of fast changes and a guarantee of a patronage from evil troubles and baleful looks. Tattoos with insects in the world of psychology can be neutral, benevolent and bearing destruction. Depending on that, on what the owner of the similar image is focused, its symbolics may be really different. Therefore before stopping the choice on some concrete sample, it is necessary to find out its final meaining with the Tattoo master.

Among different nationalities, each specie of insects was allocated with some intimate sense. Insects are capable to cause different mixed feelings in different persons - from admiration, to disgust. Earlier it was considered that they unite the different worlds. 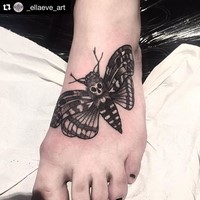 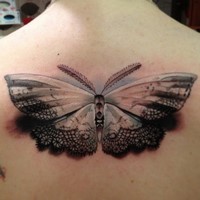 Tattoos with insects occupy one of the most leading positions as a choice of tattoo designs. You can imagine many different insect tattoos, such  as the dragonflies who are considered by earlier divine creations, butterflies, ladybugs, and the mosquitoes assimilating to powers of darkness, mantises, spiders and scorpions and of course moth tattoos, of which we speak here.

It is possible to treat similar images differently. For example, the butterfly who was earlier symbolizing human soul and immortality in the modern world can mean carelessness and levity. The same applies to moth tattoos as well - their meanings may be quite different as well. A certain sense of the image can also determine this or that understanding of the tattoo and therefore before choosing any sketch you have to understand its meaning fully.

The great number of insects can, in their own way admire and bewitch people gazing at them. When applying the tattoo bearing a certain sense, there won’t be any problems. Any drawing can be put in accuracy, and you may ask your tattoo artist to create the tattoo you like.

Most often tattoos with the image of an insect are chosen by those who wishes to emphasize the dissimilarity as many people simply don't love various bugs.