Monkey is rare enough in the tattoo world. The fact is that the interpretation of the image of this animal is quite ambiguous and diverge depending on the style of the exact tattoo image. The meaning of a monkey tattoo depends primarily on the tradition in which it is made.

In Christianity monkey usually  represents such qualities as vanity, lust, moral decline, the desire for material goods, sinfulness. Christians usually consider monkey to be the devil's assistant. In the Gothic era monkey was considered a symbol of the fall, and if the animal was represented in chains, it meant victory over sin.

Eastern culture treats monkey somewhat differently in terms of symbols and it is usually considered to be a positive character. For example, the monkey Hanuman was a true servant of Rama that possessed such qualities as tremendous strength and remarkable wisdom.

The Chinese monkey tattoo meant  sense of humor, excellent memory and good intelligence. Monkey here was associated with such qualities as performance, frugality, organization, economy and the right attitude to money. Usually persons, who applied such tattoos, loved to travel, knew several languages.

In Tibet, for example, these animals are treated with respect as a human ancestor. The Japanese believe that this animal protects children and famous picture, which depicts three monkeys, means wisdom and prudence.

Frequently tattoo monkeys may be designed in cartoon style, exposing all the flaws of man and ridiculing them. Despite the real contradictions in the interpretation of the monkey image, in general, such kind of tattoo is quite suitable for sociable and active people.

In Europe, the monkey is usually the symbol of sin, trickery, deceit, desire for luxury, wickedness and laziness.

Among Christians monkey has become a symbol of sin, lust, vanity, the desire for material goods and luxuries, moral decline, and even an accomplice of the devil.

In the gothic era a monkey with an apple in his mouth symbolized the fall of man and monkey in chains meant  victory over sin.

The Chinese see the monkey with a sharp mind, good memory and sense of humor. It is characterized by the sobriety of mind, organization, performance and frugality concerning money. However, in China monkey can be also represented with negative qualities  such as laziness, egotism, excessive emotionality, stealth and cunning.

Thus, the symbolism of monkeys is very diverse and in many respects depends on where and how the monkey tattoo is made. 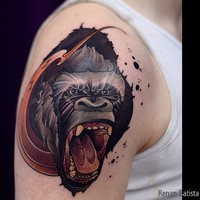 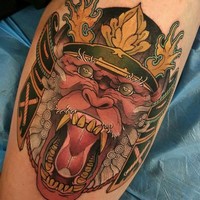 In the Middle Ages monkey tattoo could be considered by theologians and scientists as sinister parody of the man. This at first extent harmless and funny animal symbolized the worst qualities that one may find in humans. Mostly often, they were accused of laziness, deceit, dishonesty, desire to serve Mammon, and anger. Some zealots even went so far in their elaborations and accused the poor creatureof aiding to the devil.

With the advent of the Gothic era popularized two images of monkeys: the animal holding an apple in his mouth - it served as a terrible reminder of the Fall ancestor. Also another image was very popular - Gorilla in chains, symbolizing victory over sinful nature.

In the East, the attitude to the monkey was mainly positive. In ancient texts of Indian legends there has been  Hanuman, Rama's faithful servant and wise diplomat Apes. However the Chinese people have also seen positive side in this deft and agile beast. Monkey were honored for their wit, the right attitude towards money, but also with self-love, deceit and infidelity.

In Japan in the seventeenth century the image of three wise monkeys gained enoromous popularity. So you should think a lot before creating this or that monkey tattoo design.