Leopard is an incredible animal, fast, agile and beautiful. That is why today the leopard is associated with speed, swiftness, the royal grandeur and wealth. In addition, the leopard has for sure joined the popular colors of modern glamor and fashion for a long time. However, leopard skins were popular even among ancient African shamans and other ancient heroes.

There was a belief that the man who defeated the leopard, immediately gained status in the eyes of others in and receives power over ordinary people. That is what explains the fact that the leopard skin is usually equipped by great number of rulers, leaders and royals. The spots on the skin also talk of the person as a strong leader who mainains total control over his subordinates.

Leopard also symbolizes courage, aggression and ferocity, fearlessness, militancy, and other things. These values ​​can be found among all peoples. In addition, among African tribes leopard in general was a sacred animal, so his image was used by shamans to establish communication with the gods, and leopard even accompanied rulers on their last journey.

By the way, leopeard was considered to be  a guide to the afterlife by the Egyptians, he was recognized as an attribute of Osiris - the god of rebirth and the kingdom of the dead. In Christianity, the leopard is sinful and acts in the name of the devil. Despite all negative, leopard tattoos are very popular nowadays.

They are fashionable, stylish, beautiful and elegant. Mostly often, those tattoos are applied in Western culture. But the leopard tattoo will help only in case the person is an independent, easily adaptable to the environment and conditions, achieves his goals, makes swift decisions and generally knows what he wants from life.

By nature leopard is a lonely animal, so a person wearing such tattoo can be a little selfish, perhaps cruel, but it is not a hindrance to decorate your body with leopard tattoos. As for the black leopard, sometimes called a black panther, we should say that it is popular in the tattoo culture as well. Such a symbol is considered a little more aggressive and has a number of other values. But it's hard not to agree that the spotty skin of leopard is looking more attractive and interesting in tattoo designs.

Leopard tattoo is quite popular among both men and women. This symbol is usually chosen for its elegance and strength. Sketch of tattoo leopard looks equally good in both - color and in black and white. Such image is usually applied on the chest, shoulder, hip, back, as well as other parts of the body.

Leopard is a quick, rapid animal with a truly royal grandeur. Moreover, the leopard is now considered a sign of glamor. In ancient times it was believed that the man who defeated the leopard becomes the best. That is why the rulers adorned themselves with animal skins. Spots on the skin symbolized the eyes. They seem to say: "We all see and know everything." 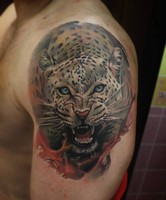 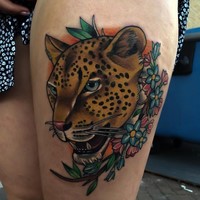 Leopard is also known as the traditional emblem of England, it is associated with the desire for freedom. Leopard tattoo is a symbol of courage, ferocity, courage. African tribes still consider the animal to be sacred. Shamans, dressed in leopard skins, communicate with the gods. The Egyptians believed leopard to be the ferocious cat companion of the god Osiris.

In Christianity, the leopard was a symbol of sin, the devil's accomplice. The Neolithic cultures of Asia considered leopard to be  a sign of the female deity of fertility. In ancient times it was thought that a leopard was a product of a panther and a lion, a symbol of valor, loyalty and ferocity. Like a panther and a tiger, it expresses power. In early Christian mythology, the animal is a sea monster. In some myths it is male friendship.