Leaf tattoos can be met rather often. They are known to attract a lot of attention because of their interesting design. Let us speak more about the meaning of such tattoos. Here we for example may take the maple leaf as a great tattoo design.

Maple leaf the well-known symbol of Canada, it is represented on a flag, and residents of this country often put themselves drawings and tattoos of this leaf as a sign of patriotism and fidelity the earth. The red maple leaf having eleven terminations — is a symbol national freedoms, a symbol of all residents of Canada and armed forces therefore such patriotic the tattoo often meets in the Canadian military personnel. Also maple leaf is drawn on emblems of public institutions and the Canadian coins. And by the end of the twentieth century it became also a symbol of the world and good.

In Asia, in particular in Japan and China the maple leaf was a symbol of all lovers, he often could be met engraved on beds of ancient residents of these countries. The tree in itself a maple very strong and resistant, isn't afraid of cold weather and winds therefore can become a symbol of firmness, indestructible spirit or a body. The maple and a maple leaf also met in a tattoo and applied art of ancient Celts, for them the maple was a fight symbol for the "I", betrayed forces for overcoming of obstacles and victories in battle.

For our ancestors of Slavs, the maple was too a difficult, sacred tree. In Slavic legends a popular plot was transformations of the person into a javor (so they called a maple). In the Serbian legends it is said that if in the spring the offended or unfortunate person will touch a maple, it will dry up if touches just, innocently condemned, the maple will become covered by green leaves. In Poland, the maple leaf was attribute gone to a better world, was considered that maple the tree of which did a coffin, could drive away a devil from souls of the dead.

For women, the tattoo of a maple leaf symbolizes the young man, harmonous and rebellious. And if to believe traditions of Germans, the maple symbolizes beauty of life. In Ukraine fallen leaves of a maple were a parting omen with darlings.

Even in modern representation the maple is a symbol of fall and grief, is associated with taming of terrestrial passions. In tattoos of prisoners the leaf of a maple is put most often to the beginning criminals. 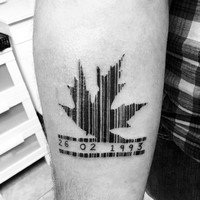 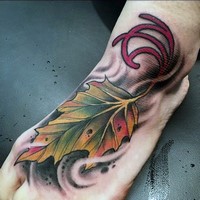 How there was a value of a tattoo the maple leaf for each individual depends directly on what aims pursues the carrier and what sense is put by it in a tattoo.

The tattoo in the form of a maple leaf very often meets at the military personnel of Canada as is a symbol of this country, and personifies patriotic qualities and love for the country, and since recent times kindness and peaceful life. The maple leaf in the form of a tattoo isn't settled by one value. Interpretations of sense of this drawing set. And at the different people the different sense is appropriated to it.

Was considered that to a tree of a maple sensitivity to an interior, empathy and division with it is inherent in his grief. If the person has a pleasure, it will share it the magnificent green top. The sketch of a tattoo a maple leaf well looks in color execution.

Maple is the mighty tree appearing in the indestructible beauty, which isn't afraid of neither a wind, nor cold. Therefore leaves of a maple are a sign of powerful will power, indestructibility of spirit and firmness of a body. The men having a tattoo with a maple leaf as if transfer to themselves all properties inherent in this tree.