Gargoyle tattoos become more and more popular, according to the number of inquiries in the tattoo shops during the last years. For tattoo artists it is not very simple to show with ink the stony features that have these creatures, that’s why they use monotonic colors with mixed shading. Gargoyle tattoos belong to the gothic style and is mostly chosen by males. In ancient times, as it was supposed, gargoyles appeared to be stony statues, that guarded houses and were ready to turn alive in any moment.

These creatures were created to draw the water from the walls of sacred gothic cathedrals. If they have been not used according to their straight purpose, they just have been the ornament of the house. For example, now such creatures can be seen on the old buildings of New York, Washington and Philadelphia. Let us see what gargoyle tattoo designs can look like. To understand this one has to realize how gargoyles themselves look.

Gargoyles are the architectural stone creations that remind something of human character, and were considered to be mythological creatures. These big and various figures were usually situated near the peaks of the buildings in intention for them to be seen

Gargoyle tattoo designs are highly associated with gothic, gothic architectures of the palaces and cathedrals of Europe. If we try to examine gargoyles just in architectural purpose – they were used as a covers for drain of the buildings. They came to architecture from the ancient mythology. Their sculptures are made from stone, according to the known nature of gargoyles. Gargoyle tattoo designs represent the stone demons that hide in the rocks. Sleeping monsters, they are carved from the stone, and mean the evil spirits that leave the church, or objects representing the evil forces or forces that fear away the evil spirits. In mythology gargoyle is a creature of not strong wit and is always a servant of some mage, similar to golem. 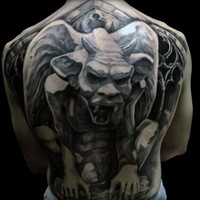 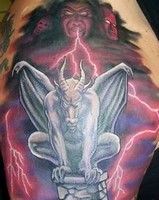 In medieval religious art gargoyles are represented as the symbols of cosmic forces or images of demonic and inhabited with dragons underground world. In the last example they are the prisoners of some spiritual force. This reveals their state in the order of the ornaments. They are always obeyed to angels, heaven images and are never depicted in the centre.

Gargoyle tattoo is designed mainly to guard the bearer and fear away evil spirits. The only negative thing about it is that this creature is of demonic origin, not too clever and not too kind.

Gargoyle tattoos can be very different. They are highly associated with medieval times, but they appeared long ago. Such gargoyle tattoo designs represent not just ugly statues. Many gargoyles have the shape of certain animals.

Lion was the most popular image for gargoyle creators. Lion was always known as the most popular non-european animals that were used in medieval times for ornamenting churches and cathedrals. Later they made it to gargoyle tattoo designs and symbolized the sun – their golden hair represented the sun of our life. There are many admirers of gargoyle tattoo designs. Dog gargoyle tattoos are very popular too – they rarely were considered only as pets. They guarded houses at night that’s why they were considered to be clever and devoted. On the one hand it can be considered that dog gargoyles were designed to guard houses as well, but there is another meaning. The dogs are always hungry and often steal the food from people, that’s why in that time dog gargoyles were often placed on cathedrals and churches for everyone to see, that even such devoted animal as the dog, can commit sins and be the victim of greed.