Faries or elves are the small, non-existing fairy creatures that possess magic forces. These are the fairy creatures that can be represented in fairy tattoos rather differently – in the shapes of beautiful girls or ugly grannies with wings. Very often fairy tattoo designs represent the wings of the butterfly. Fairies possess the ability to do magic and to change their appearance according to their likings. These fairies spend almost all their time dancing and having fun.

Many people believed in these creatures and worshiped them, that’s why fairy tattoo can be the guardian of the person who loves nature and stays close to it.

According to the Bible legend, fairies are angels. They once lived in paradise and couldn’t choose who they should support – devil or god. As a result of deep and long thought, fairies became neither demons, nor angels. They found their way to the sinful world and began to apply their magic to help people.

Fairy tattoos also became popular because of increasing popularity of fantasy genre. They mean that on human life only fate has its influence and nothing more.

Besides all that fairies equal puzzles and charm, they also give a spring of positive energy for tattoo applicant.

Fairy tattoos have different meanings, that change depending on basics, color, wing style, the style of wings and the way of application and other factors. For one they mean the black magic of their bearer. Other understand fairy tattoos as the symbol of eternal youth, freedom and non earth beauty. Third ones see in it the desire to preserve child-like comprehension of the world, imagination, surprise and to wake up a small child who lives deep inside any adult person.

Forest fairies symbolize the unity with forces of natures. It is also the symbol of young and innocent girl.

Fairy in sorrow is the image of dead person whom another person loved. Another fairy tattoo is the envoy of the peace.

Often fairies appear to be the symbol of overcoming of difficult life situation. Sometimes fairy tattoo designs can be accompanied with stars or the moon. Fairy,  the word itself, stands for “fate” and this one thing is enough for fairy tattoo to become that popular – we all have attitude to fate, all overcome difficulties and feel joy when everything is going good. Fairy tattoo can have peculiar meaning, that can be applied to a certain way of life, parts of fate and important moment in life. 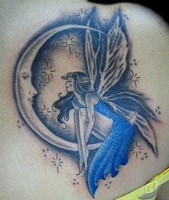 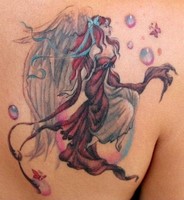 In folklore of most countries, fairies are depicted as the magic creatures of famine gender, small of size with wings and sharp ears. They live near rivers and in the forest. Usually they have good appearance, countenance and voice similar to the bell. Very rare people can object hypnotic stare.

Every kind of fairy has her own kind of entertainment. Many fairies tell about the kindness of fairies and their longing to help people. Very often fairies  show the way, give needed advice and give presents that cannot be talked about with anybody.

For today, still, everybody considers fairies to be good creatures. Fairy tattoo most of all symbolizes success and flourishing. Also fairy tattoo designs bring some youth symbolism, reminding about the fact, that every adult man slightly remains a child in his soul.

Many people make fairy tattoos to protect themselves, and believe in its magical properties and hope, that being always close, this friendly creature can solve the problems, correct mistakes, bring justice, calamity and peace into everyday life and protect from evil.

According to its origin, fairy tattoo is considered to be famine. In masculine variant aggressive fairy can be more suitable.