Since the ancient times dolphins were loved and adored by people greatly. They are respected, revered, admired. These smart and beautiful animals and  their great behavior and way of life truly deserve the title of a favorite.

The meaning of a dolphin tattoo varies slightly depending on the style and context, but is always only positive and equally suitable for men and women.

Dolphins are different from the rest of the fish and other animals because of their high level of intelligence, friendliness and playfulness. The image of a dolphin has become a symbol of nobility and good luck, speed and sea.

Two dolphins mean the Chinese yin-yang symbol. The ancient Celts dolphin was the personification of the main elements of water, which meant a rebirth and a new beginning. In the North America dolphin meant  a symbol of goodness, wisdom and power.

The Christian religion considers dolphin to be a mere big fish, and the fish is usually associated with the crucified Jesus Christ. Dolphin that goes before the ship is known to be a symbol of Christ, leading the holy Church.

But the ancient Greeks and Romans believed that dolphins use to escort souls of dead people to the other world. (A journey through the sea to the Isle of the Blessed's death). Besides, in Greek mythology, the dolphins were often associated with love and eroticism. Perhaps this happened  because the dolphins are the only animals in the world (except humans) that have sex for pleasure. The Greeks named the dolphin as King of the Sea and tied it with Poseidon - the god of the seas. In Egypt, the dolphin was the attribute of the goddess of the moon, femininity, motherhood, healing and magic. He was the personification of all the positive forces of nature.

Today, there are many stories about dolphins saving the people, who were accidentally  thrown overboard or drowning in a sea, and therefore became a symbol of salvation: the salvation of soul and body.

The Cretan and Etruscan mythology was thought that gods themselves use to travel on dolphins. In the Minoan culture, the dolphin was known as  the personification of the power of the seas. Usually the life of the dolphin is considered to be  interesting and relaxing, so it became a symbol of dreams and prosperity.

These animals are not infrequently seen as guides to the before unknown worlds, and they protect people against the dangers and link the natural world with the inner world of man. Also dolphin is known a talisman, bringing luck and all this came to the dolphin tattoo images. The value of a dolphin tattoo may be taken as a symbol of the desire for freedom, faith in goodness, unintentional joy and willingness to help.

It becomes clear why a tattoo of a dolphin is so attractive and popular. 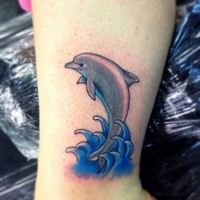 It also serves as a symbol of the marine element, freedom, joy, generosity. In ancient Greece, the dolphin was regarded as the bearer of souls of the dead on the island of the blessed.

In addition, it is associated with the saving of the drowning people, which has been said earlier.

The last aspect of the dolphin symbolism was borrowed by Christianity, where it binds with Christ - savior of the world (as the dolphin was regarded as a fish, and the fish - a symbol of Christ).

There may be plenty of different dolphin tattoo designs and it is up to you to choose the one up to your liking. Many people love dolphins because they are known to be the kindest and the best creatures in the world. Others love them because they look really great almost on every part of the body.