The surprise may be really great, but even the most famous people, such as the fastest man in the world - Usain Bolt - has tattoo of the cheetah. Probably it is not so strange, because actually both of them are the fastest. Such pair should have existed. However, cheetah is not only about speed. This is the royal creature.

Cheetah can easily quickly be made a domestic animal that’s why they are known as really good pets. The Egyptians noted it and many rich people there took cheetah as their pets. Cheetahs are also good hunters, they prove to be really skillful. Actually Cheetah means the spotted - this way people noted this animal. The animal is all about power and status. In Africa, for example, many kings and statesmen wear cheetah skins. Also cheetahs found their ways to many famous paintings of the period of Renaissance.

In popular culture cheetahs are also very famous - just remember Chester Cheetah. Also Cheetahs could be found in many cartoons where they could be both good and evil.

Cheetah tattoos are also very popular, and you have a chance to have it right on your skin.

The meanings of Cheetah tattoos can be different, but the main ones are known to be beauty, agililty and elegance. Cheetahs are known to be very exotic and therefore have a lot of different other characteristics. Let us show here the most popular ones.

Cheetah tattoos can have quite different meanings. Among them the following - it can show beauty, agility, speed, intelligence, allure, seduction, determination and focus, nobility, grace and elegance. Of course it is thought that the persons who apply such cheetah tattoos onto their skins begin possessing all of those qualities at once. 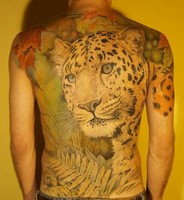 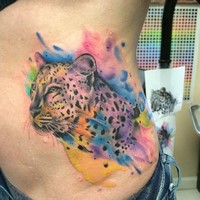 There may also be many different variations in the design of cheetah tattoos. Someone likes to have whole cheetah at his disposal and others love just parts of cheetahs on their skin. Of course the most notable part of any cheetah is its spots. That is why tattoos having cheetah spots are so popular. They look great on human skin and there can be a lot of different pieces of artwork that can be applied to different body parts, such as hips, thighs or back. Such cheetah tattoos may also be applied to different group of muscles and sometimes it seems that the cheetah is moving - the effect is usually really great and many people love it a lot. This kind of tattoo is mainly used to show the animalistic nature of the applicant. Usually it is done by women who are known to be fond of different exotics and beauty. So in case you need to underline your inner animalistic nature, cheetah tattoo will be of great help here. It is known to be a really good design that will flawlessly suit almost any body part you like. There are many different tattoo designs connected with cheetahs and usually skillful tattoo artists have plenty of them in their portfolio. If you choose such tattoo design, make sure that it will be designed individually for you because for sure you wouldn’t want the same one, taking into account the popularity of this animal and the willingness of all persons to create such kind of tattoos.

To tell the truth, females are especially keen on making such tattoos, however there are no needs to worry because those tattoos may be so different, that you may easily ask your tattoo artist to create the tattoo that will be unique and up to your likings. Nowadays, when the tattoo mastery is so great, it is not too hard to choose what you like - the offerings are really vast and great.

To sum up, the cheetah tattoo will be suitable to both men and women and will help to reveal their animalistic nature and qualities.