Bat is the unique and interesting animal - it is the only mammal in the world that can fly. In general the meanings of the bat tattoo designs can be divided into two parts that are made according to the two types of understanding of the symbolic meaning of this animal. They are totally contradictive from each other - the first one is more negative and more wide-spread, while the second one is much more positive. Let us review both of those meanings.

The bat is the night predator and that is why it is always considered to be connected with evil, danger and even death. People believed that there could be evil sorcerers, vampires and so on, hiding under the hood of the bat, being therefore the source of evil. There is also one kind of the bats-vampires that hunt at night and feed themselves with the blood of other animals and even sometimes are harming people. That’s why people were often afraid of bats and hate them, even its appearance made them shiver.

In medieval Europe, before the Christianity widely came to it, the bats were considered to be the bearers of the unique ability to feel the hidden powers of nature and to contact with other worlds. This is why they were held as pets by witches and were also often used during many of their evil rituals. After the Christianity came and was wide-spread, the bats were associated with devil and were understood as the symbol of Satan and idol worship. Those creatures were destroyed because of the fears and supertitions. The corpse of the bat hung near someones home was considered to be the good protector against evil powers and spirits. In the mythologies of Brazil and America the bat was considered to be the evil god of the other world, the enemy of peace and light. Some people even thought it to be able to swallow the sun. 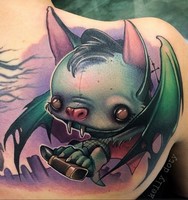 However, there is another meaning of the bat, positive one. For example, in Anicent Rome and Greece the bat was regarded highly because of its sharp vision and understanding of the space. It symbolizes wit. In China bats are also regarded rather highly - this animal became the symbol of luck, fertility and longevity of life as well as the symbol that means good death.

So those are the two attitudes for the bats and they found their place in the bat tattoos as well. If we speak about the bat tattoos, we can sey that the certain meaning of this or that bat tatoo is usually dtermined by the applicant himself and by his own attitude to this creature. Really, everything depends on yourself and on how you understand the meaning of the bat as a symbol, and which path you take, as well as which theory you support while choosing the bat tattoo design. However, there should not be necessarily the certain understanding of the bat tattoo. It is your own will that you have to consider the first. If you like the appearance of the bat and want to apply it onto your skin because you consider it to be beautiful, it is up to you.

Why is it so popular?

It is necessary to say also that the popularity of the bat tattoo design became significantly greater after the Batman movie was released. However, soon this popularity seem to sink a lot and nowadays you won’t see many persons wearing bat tattoos, however, bats are looking quite good on many different parts of the body. So, to sum up, usually bat tattoo designs mean fertility, longevity of live, good health as well as good death without pain. Of course there is a negative, so-called demonic meaning in the bat symbolism, because the bat wings are similar to the wings of the fallen angel. That is why bats don’t like the sunlight and are mainly active at nights. Of course bats also symbolize vampires because they may be fed by blood.