The meaning of the rose forearm tattoo can be very interesting, different and deep. Among all other flowers that may be depicted on the body rose is the most popular and beautiful flower in the tattoo art. For the long history rose has become the most widely used flower in tattoo world and well-known symbol not only among women, but among men as well.

In general, rose is the symbol of love, beauty, purity, youth, sacred things and rebirth. It has all the beautiful traits.

In western world rose together with lily occupy the lotus place in the East as the sacred flower and are known to be very close to it in its symbolism. Also the rose can mean such things as eternal live, eternal joy and remembrance. Sometimes rose forearm tattoos can also symbolize silence and mystery. 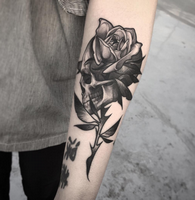 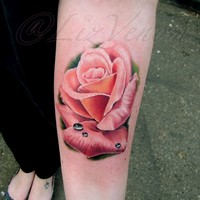 The leaves of the rose symbolize joy, the thorns - sorrow, and the flower itself - glory.. The golden rose is the emblem of Pope and means perfection, the red rose is known to be love, passion. White rose is the symbol of light, it also symbolizes devotedness, purity, virginity, everything spiritual. Also the blue rose became the symbol of everything unreachable and impossible, while the yellow one shows sorrow and parting.

In alchemy rose is the symbol of wit, of absence of the needs, as well as the rebirth of everything spiritual after the death of flesh. In Chinese culture it has great value because of its smell and is known as a good symbol of flourishing.In the Ancient Egypt the flowers of roses were dedicated to the goddess Isis as a symbol of pure love that is free from everything connected to flesh. In Greek and Roman culture rose was the emblem of Aphrodite, as well as the symbol of always winning love.