The tree tattoos are not the most popular in the world, but they can be named as having the most deep understanding and meaning. They possess the powerful symbolic meaning and that's why such image on the body will not only be the beautiful picture, but the revelation of thoughts as well. Every tree tattoo can be different according to the shape and image and that's why will be able to bring different thoughts. Of course, the main meanings of such tree tattoos are the eternal life, the development, fertility and the connection with nature.

Trees, as well as many other plants, have been honored since the ancient times. People always gave them peculiar attributes, made them alive creatures in legends and made them possess different magical traits. Without trees life would have been unable. Such tattoos, the meaning of which is not single and is known to be deep, will always mean health, the connection with the outer parts of the world and the life energy. 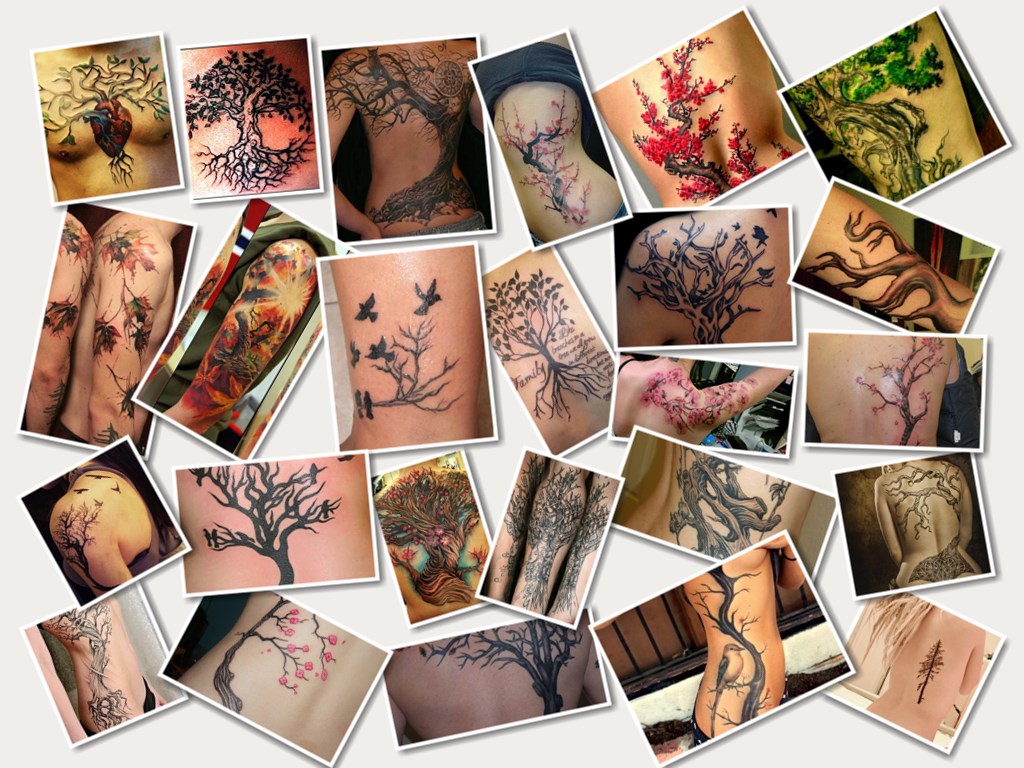 If the tree tattoo is depicted tall with roots in the ground and branches high in the sky, we can say that this represents the connection between those who will live with those who already lived. Anyway, the tree tattoo and its main meaning that is known to be approximately the same, is the symbol of the immortality. This picture shows the power of the soul, the physical might, the inner and the outer beauty. Here everything should be done with harmony.

The new tattoo artists usually represent not only the shape of the tree but also give the tattoo image the unique traits that can be used to determine the exact kind of the tree. Each and every such tattoo can be described with the deep and individual meaning. Birches are usually chosen by women. They symbolize purity, innocence and ease to break.

Oak tree tattoo usually has the meaning that is opposite to those of birch. Oak tree tattoos usually mean great spiritual strength, the might of the soul and the body. Such tattoo can be applied only by the persons that have strong will or by those who want to become such. Such image symbolizes the sense of honor, happy and full life.

New-year tree usually means the longevity of life. It will surely help those who lost the health and helps its restoration. Bamboo tree tattoo is known to be the symbol of young, active and brave people. It symbolizes short but full life.

Very often tattoo artists make tree tattoos in form of the so-called tree of life. It is usually depicted middle-sized, with long branches and the abundance of leaves, as well as the roots. The name of this tree speaks for itself, but it is not the only meaning of such tree tattoo picture. The person with such image on his body will always remember the meaning of life, of his connection with the ancestors and over the time will become more and more clever and will know life from different points of view.

Another symbol of such image is the beauty and attractiveness – the spiritual and physical. The tree tattoo will be rather suitable for those who seek spiritual inspiration, longs for resurrection, and also by those who is interested in the eternal life or at least the long life.

The depiction of such symbol on the skin is the way to gain stability. It can help to understand the persons own thoughts and to make a transition to a close understanding of yourself. Some people also can use tree tattoos to remind them about the losses and hardships of life. Sometimes also scars can be put on the middle part of the tree.

Anyway, such picture looks beautiful and attractive. It can be used by both – men and women. Usually such tree tattoos end on the backs or forearms, more rare – on belly or hip.