The tree is known to be one of the most ancient images in graphic semantics. Nowadays it is not known from where the roots are coming, but the first images of trees were found in the Slavic culture and the culture of legendary Celts.

The Slavic tattoo with the depiction of the tree brings us to the epoch of our ancestors. Different Slavic tribes and their ritual events are highly connected to the mystic image of the tree that is symbolizing usually fertility, space and time. 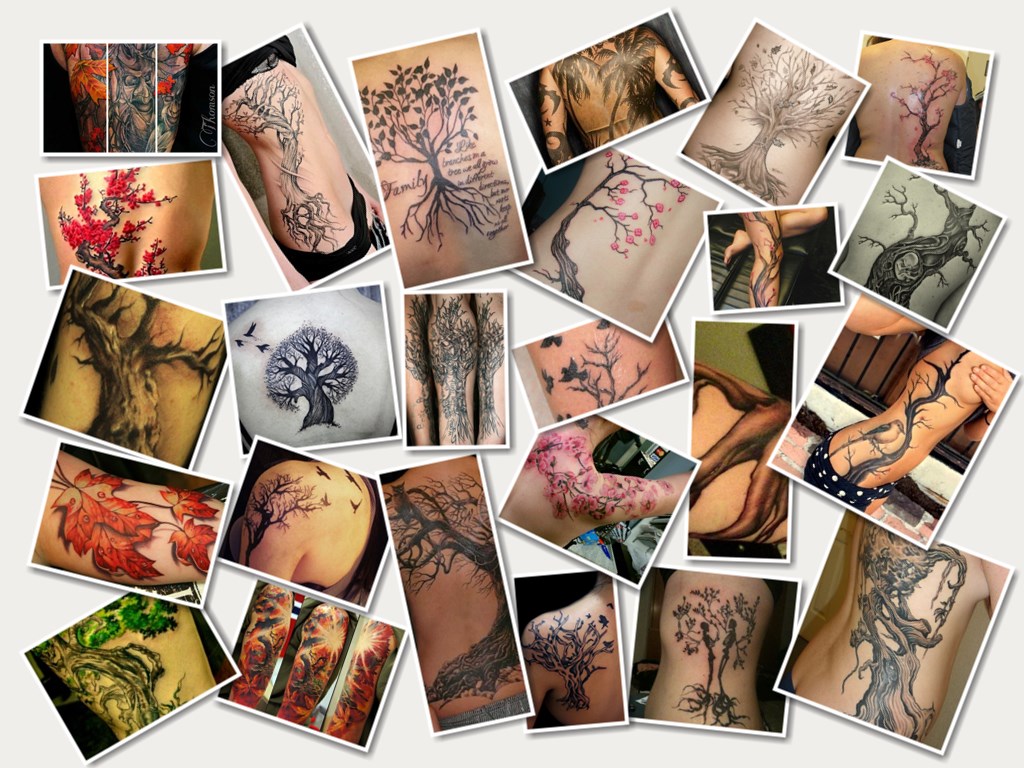 Ibn-Fadlan, the Arabic diplomat who was living in the year of 922 made a trip to the Russian land that was positioned at the banks of the Volga river. His attention was attracted by the tattoos on the bodies of the representatives of Slavic tribes. They began from the nails on the hands and ended near the neck. The people were ornamented with the use of the images of plants and animals. The tree symbolized stability – in the spring the new leaves are born in the place of the lost old ones. In Russian tattoo art every tree has its own meaning. For example, the big oak tells us about might and strength, the birch gives us the meaning of tenderness and famine.

Ancient Celts thought about trees as of ancestors of human beings and they thought that they have souls. The connected roots and branches usually symbolize the knowledge of the world and its unity with everything unknown. Celtic people usually made such images more complex and thus they underlined that the nature is too complex to be understood by a regular human being. The complex ornaments and spirals reveal the cycles of the year and the success of different epochs.

The semantics of the Celtic tree has a deep connection with the understanding of everything divine. It is also known as the sacred tree of Celts: sometimes the trees are pictured as the hands that are longing for the sky and with roots that go deep into the ground. Sometimes such image has a border in the shape of some ornaments – this is unique Celtic ornament that usually symbolizes the spiritual and earthly paths of human beings. On some tree tattoos we can see a bird on the top of the tree. According to beliefs of Celts the bird is known to be the symbol of freedom and it helps people to get deeper knowledge.

In many different cultures the tree is known to be the symbol of trinity – the head of the tree means paradise, the central part of the tree – the earthly living, and the roots means hell. In the modern new-age culture and with the help of the supporters of different Zigmund Freid theories there is also a meaning that the upper part of the tree means immense knowledge, the central part – the egocentrics and the roots – everything unconscious.

Despite of the fact that the main meanings of the tree symbols are known to come from Slavic and Celtic history, in other parts of the world and in other cultures such ornament also had great philosophical and mythological meaning. For example, such Egyptian gods as Osiris and Isis were born, according to the numerous legends, from the tree of life. The Chinese tree that is depicted near the dragon and the phoenix was usually used to remind the insiders about the immortality. The Japanese tree sakura, that is known as one of the key symbols of this country, usually represented such meanings as everything young and the cycles of life, as well as its renewal.

Traditionally the tree tattoos are made usually in black and whit colors. The best places for such kind of tattoo are known to be the lower parts of the legs, the chest, the forearms, the shoulders and of course on the back, because the available space there is really great and it is convenient to apply such things there.