Tree is considered to be one of the images that have real, deep and symbolic meaning. Trees can be different and that's why the meaning of tree tattoo is highly connected on the fact what tree and how is depicted on the body. In any general case the tree image in the tattoo art can mean the natural dynamic growth and development, renewal and cycles of life, the foundation of the universe and the connection between the sky and the ground. Also the tree is considered to be the symbol of fertility and immortality. In many epic myths and legends the trees are represented as living creatures – they can move, breath, communicate with each other and possess some peculiar magical abilities.

The most well-known and wide-spread tree tattoo is considered to be the tattoo representing the tree of life. Such tree has a unique symbolic meaning. The tree of life can be met in many cultures and religions. In Christianity the tree of life was the main tree of the garden of Eden and it was growing right in the center of paradise, near the tree of knowledge of good and evil, from which the first men ate and this closed the doors of paradise for them. This tree became the symbol of development of everything living with God. The fruit and leaves of the tree of life give people salvation and health – to all the righteous people. 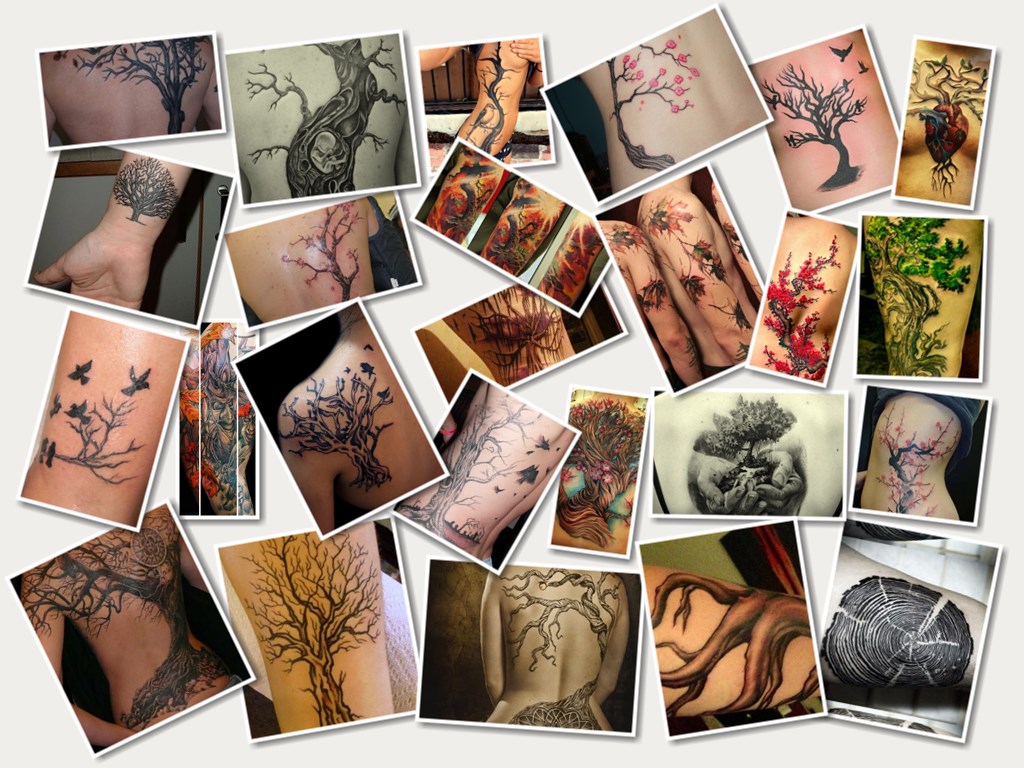 Ancient Celts also had the meaning of the World tree, that was connected with the single and unique center of the world. If we believe Celtic myths, in the end of each parts of the world there grows a sacred tree, and the fifth tree is growing in its center. The analogical understanding about the five sacred trees can be found on the different part of the planet – in the Central America, among the tribes of Aztecs. In the Celtic tree of Life the roots and the branches of this tree are united into the single circle, thus pointing to the eternity of life and to its endlessness. Famous Celtic crosses can be often similar to the World Tree. The similar tree of life is also known in Slavonic culture, its depiction can be met on different devices for home use. There it symbolizes the human nature itself,  as the source of life and development. This tree has its roots in the ground and its branches high in heaven and this way it connects the predecessors with ancestors that live in different world. The tree of life is the beginning of all beginnings, it is the birth of life itself. In Egypt the main gods Isis and Osiris appeared from the tree of life. In China such tree was guarded by dragons and it was considered as the symbol of immortality. Such tree tattoo can be also the symbol of the eternal life and the symbol of its creator.

Of course it has to be understood that the tree in the tattoo art should be perceived not only as a good and interesting tattoo design, but also as the tattoo image that has great and deep meaning and the symbolic understanding. If we speak about different tree tattoo designs, it should be said that if you want to apply one, you will of course find the exact tree tattoo design that you look for and you will be able to find the meaning that suits you the best. Tree tattoos look usually beautiful.